Sorry Mike Ashley, but turning House of Fraser into ‘the Harrods of the high street’ doesn’t sound remotely appealing 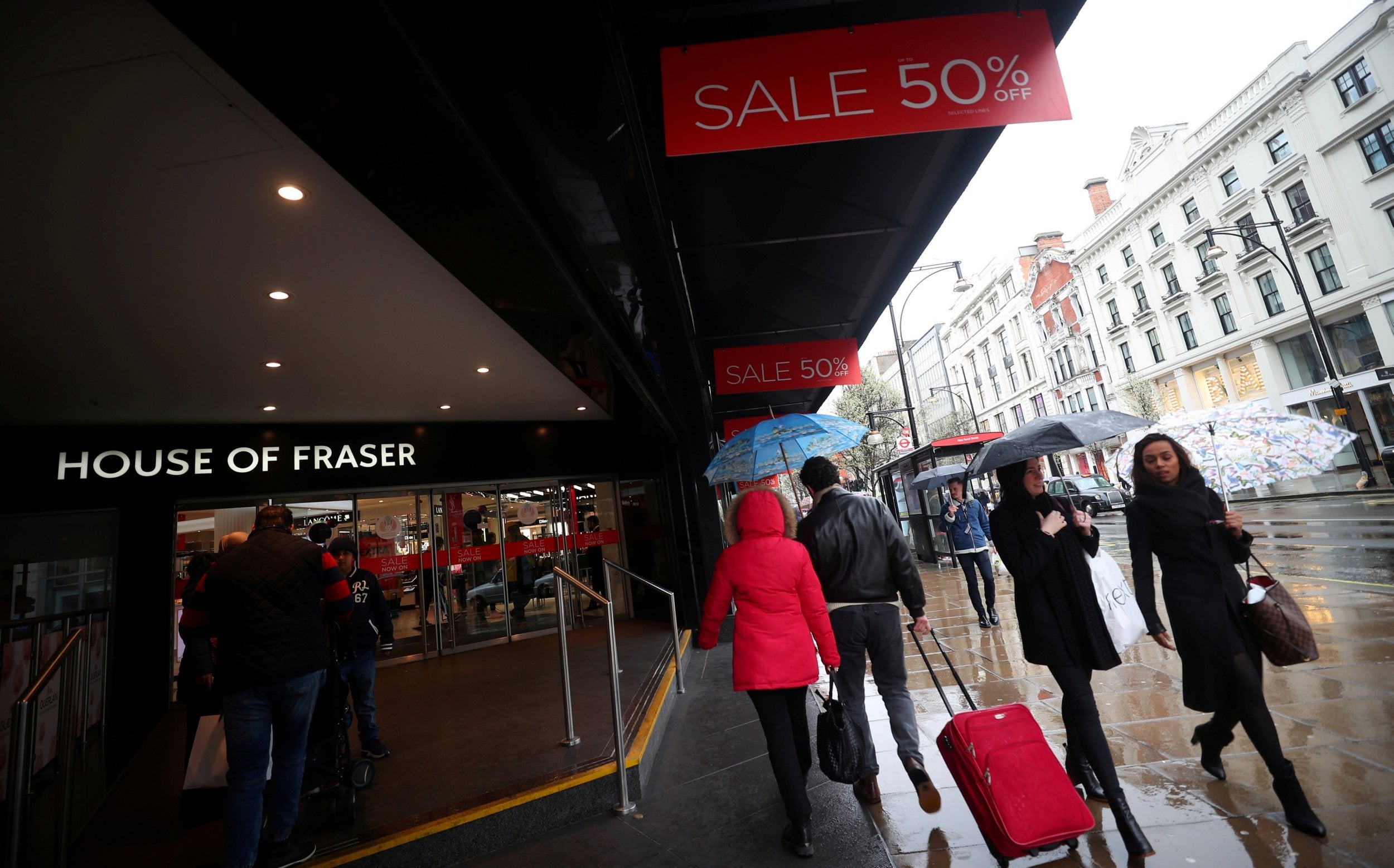 I was strolling up Long Acre in Covent Garden the other day, thinking I’d just pop into Marks and Spencer on the corner to get some reduced-fat coleslaw and possibly a triple pack of knickers, because my underwear drawer has gone a bit “lost property”, when I realised the shop had shut. As in “closed down forever”, and not temporarily “for refurbishment”.

I was aghast; I’ve never been in that place and not had to queue. Apparently they are looking for alternative Covent Garden premises but possibly only for the food hall.

As we all know, Marks isn’t the only big name retailer in trouble. Last week, House of Fraser was pulled back from the brink of liquidation by the guy who owns Newcastle United. Mike Ashley bought the franchise for £90m and is promising to turn it into the “Harrods of the high street”.

Hmmm, not sure we need another Harrods – personally I haven’t been in the place since the Nineties and at the risk of sounding a bit of a cow, isn’t it rather naff?

Don’t get me wrong – I’m a big fan of the department store. Aged 13, the Miss Selfridge section of Lewis’s in Blackpool was my Mecca; just steps beyond the counter selling the Ladybird vests that I was still wearing, it heaved with the promise of clothes boys would want to snog me in.

I’ve worked in a department store, too: I used to toil in the Danish Kitchen of a small but rather select department store called JR Taylor in St Annes, where ladies of my grandmother’s generation kept their hats on to eat newfangled cream horns before “testing” expensive skin products in the impossibly glamorous beauty department on the ground floor.

JR Taylor closed down in 2015 and three years on the site remains empty, its generous doorways a haven for street sleepers. Personally I think that while everyone dithers about what to do with the building, the council should be forced to open its doors and use it as a proper hostel – empty buildings are criminal when there is homelessness.

So what do people want from a department store? Personally I don’t like the very big ones. Selfridges puts me off by its sheer size; I can’t be bothered, I feel tired just looking at it although I love seeing its Christmas windows. Liberty, on the other hand, is the perfect pocket-sized store – just a shame its prices aren’t similarly sized, though for a shopping experience I’m not sure the place can be beaten. Certainly none of the New York stores that I’ve visited have any of its charm and I would still put it in my “top 20 things to do in London”, because, even if you keep your purse firmly shut, you can still squirt yourself silly in the perfume department and try on scarves that you will never buy.

As a boring old 58-year-old fart, my go-to department store is Peter Jones (owned by John Lewis) in Sloane Square: it ticks my size box and the staff know what they’re talking about. This is where I buy blinds (which an expert will come and fit), furnishing fabrics, bedding and towels.

Ask any middle-aged woman what the highlight of their year is and a good percentage will say “the John Lewis bedding sale” because what’s not to love about a 50-per-cent-off pillowcase?

One of the joys of touring is having a mooch around the local department store in places like Norwich and Harrogate, where you know you will always be able to pick up a decent foundation in your skin tone (mine’s “London Cement”, by the way) because of their extensive makeup collections. Ah, but here’s the rub – quite often the department store won’t have that thing that you’re specifically after, and this is where the internet comes in.

If you know what you want and you’re promised next day delivery, it’s very tempting to avoid the schlep into town and click a few buttons instead.

The big question, of course, is whether the department store can coexist with online shopping. I’m very hopeful that it can, but I’m going to have to watch my own purchasing habits so that I don’t add to its demise.

So in a bid to curtail my online shopping, I’d like to install some kind of breathalyser on my Mac so that I can’t purchase post-10pm, when I’ve had a drink.

We’ve all done it. When I admitted on Twitter to a booze-inspired shop the other night, my favourite responses included people owning up to the attempted post-midnight purchase of a Segway and a very expensive “Eglu cube” chicken house. This is the real danger of online shopping. In the old days, once the shops had shut, all you could waste your money was a bag of chips – now, if you’re not careful, you can end up with a thermal lance and a load of diet pills from India.

Let’s face it: we would all shop more sensibly if we shopped stone cold sober in a department store.